Bride perfectly trolls her groom by dressing up as T. rex 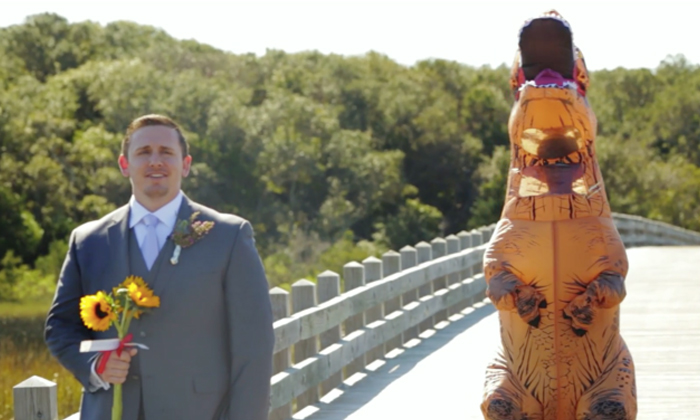 A woman from Chicago decided that her wedding was the perfect day to dress up as a dinosaur, and the groom’s face was priceless.

When Elizabeth Rex Hundley married Tom Gardner in Bald Head Island, North Carolina, in November, she wanted to make it unforgettable for him.

Elizabeth showed up to the first look in a T. rex costume while the groom’s back was turned.

The look on the groom’s face when he saw his future wife dressed like a cast from “Jurassic Park” was priceless.

The bride got in the wacky costume in part so she could see the groom’s face when he first saw her on their wedding day, but for a more personal reason as well.

”My mother’s maiden name, and my middle name, is Rex,” she told The Huffington Post.

“So, I thought it would be funny to wear the costume on the day I would go from a Rex/Hundley to a Gardner.

“I even had my bridesmaids take pictures of me the day before the wedding holding a sign that said: ‘Today a Rex, tomorrow a Gardner.’”

Elizabeth admits being nervous about how her future husband might react at the thought of marrying a woman in a T. rex costume.

“I was a little worried, which is why you can hear me saying, ‘Are you freaking mad that I did this?’ in the video,” she said. “But he has always encouraged me to be myself, so I took a shot in the dark.”

Tom admits he was shocked by what he saw.

“I was floored, completely and utterly surprised at what she did.

"I was totally disarmed and could not stop from bursting with laughter. It was just so her.

“Some residents of the island drove by a few times with giant smiles on their faces and laughing, but I didn’t have a clue as to why."

The happy groom said the T. rex costume was the perfect start to their life together.

“It validated for me all the planning that went into that day and started things off right and kept it lighthearted. I knew I was marrying my partner in life," he added.

The video also shows her getting out of the costume before taking her vows.

Costumes have played a significant part in their relationship. Elizabeth was wearing a Captain America dress when she first met Tom in 2012 in a Chicago bar.

They started dating two years after that, and got engaged in August 2015.

Take a look at how Elizabeth trolled Tom by wearing a T-Rex costume for his "first look" at the bride in the hilarious Facebook video below.