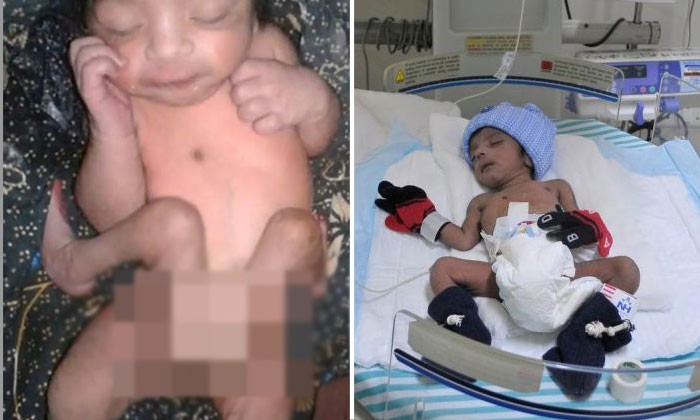 Doctors in India separated a baby born with four legs and two penises from his parasitic twin last week.

A team of 20 doctors, nurses, and technicians operated on the infant for over three hours.

The baby suffers from the genetic disorder polymelia, where a child has extra limbs due to an undeveloped twin.

Since the parasitic twin did not have its own heart and circulation, it leeched its blood supply from the surviving twin, Dr Sanjay Rao from NHC explained.

This greatly endangered the baby's life, and he once had to be resuscitated after making the 460km-long journey from his hometown of Karnataka to Bangalore for treatment.

After his vital signs were stabilised, doctors studied the baby's blood vessels and blood supply and also checked if there were any shared organs.

He was placed under observation for a few days before doctors deemed him strong enough to be wheeled into surgery.

Although his 23-year-old mother had a normal delivery on Jan 21, the baby needed specialised medical attention soon after birth, the Times of India reported.

"It is God's gift to us," the woman said as she initially intended to raise the child as he was.

But she later agreed to send him for further treatment after medical counselling and learning that the NHC had offered to treat the baby for free.

The parents, who are both farmers, were unable to afford medical treatment for their son.

Although there is no official record of the number of polymelia cases, Dr Rao said that it is an uncommon condition.

NHC had previously treated three other cases, of which the case of a baby girl born in 2007 with eight limbs was most prominent.

According to Bangalore Mirror, the baby boy has recovered well and is expected to be discharged from hospital next week.