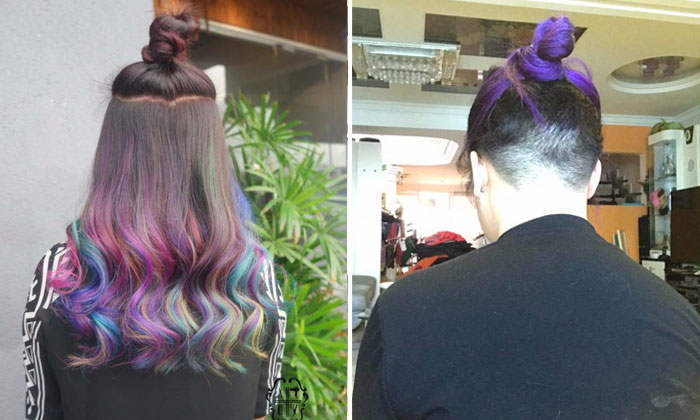 Hair bleach is undoubtedly dangerous and should be used sparingly -- which is exactly why most choose to go to a trusted hair salon to let the pros handle it safely.

But what happens when the hairdressers themselves over do the bleaching?

Well lets take a look at what happened to Mon Wong on one uneventful day.

Colouring her hair was nothing new for Mon, she enjoys pulling off vivid coloured-hairstyles -- well maybe not anymore.

So during her appointment at her usual hair salon (which she has been patronising for years), one of the hairdressers messed up after over-doing the bleach -- and this completely destroyed her hair.

According to a report by The Coverage, the lady boss did not know that Mon was in the store at that time, and later told her that the newer staffs did not know the nature of her hair.

The boss then suggested for Mon to shave off her badly damaged hair as it is not longer "usable", and pointless to save her hair in this given circumstance.

And Mon who was still in a state of shock, agreed with the shave.

Thankfully it was not a bald shave, but just shaving off a larger portion of the bottom part of her hair.

Though the lady boss apologised multiple times and did not charge her for the service, Mon was still not over the fact that her hair was ruined.

We got to admit though, the shave is not too bad -- it actually looks like a pretty bold and unique hairstyle when she ties it up.

You might be thinking, she probably would not patronise the salon after this horrific episode -- but according to the report, she still seemed to be protective of the salon.

Now that is dedication man.

She did not want ruin the store's business, but instead just wanted to share her traumatising experience.

So if you are planning to dye your hair anytime soon...please make sure to go to a trusted salon.