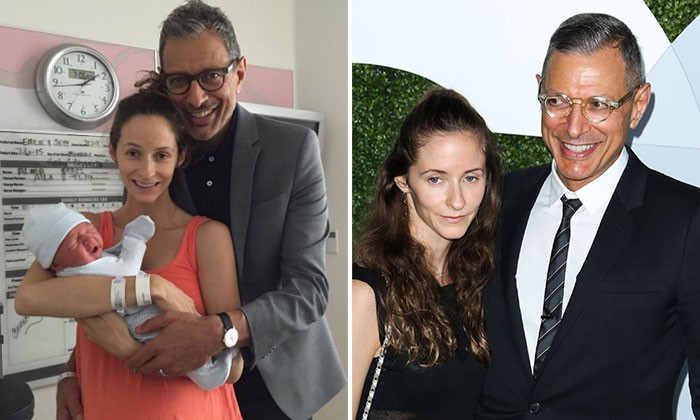 Jeff Goldblum and Emilie Livingston are expecting their second child together.

The 64-year-old actor and his 34-year-old wife - who welcomed son Charlie Ocean Goldblum into the world in July 2015 - are set to expand their family in April.

Emilie shared a throwback picture of herself on Instagram and wrote: "Round and round we go! I'm 15 weeks pregnant in this shot and I'm SO excited for our newest addition to the Goldblum family, arriving early April. #growingfamily and #love (sic)."

The couple tied the knot in November 2014 in front of their family and friends at the Chateau Marmont in Los Angeles.

A source close to the actor said of the big day: "It was a night filled with love, music, and lots of laughs."

And Jeff has previously admitted he was like a "teenager" with a crush when he first laid eyes on his Olympic gymnast wife.

He said: "I was immediately thrilled by her and walked over. The next couple of days I pursued her. I talked to my friends about her.

"I was like a teenager. She makes me and Charlie laugh. I like the way I make her laugh too. It's important to me, the way we make each other laugh."

The actor admitted he never considered having children until he met Emilie.

He said: "I never seriously considered it until now. I'm at a different place now. I was enthusiastic to marry Emilie and try to have a baby.

"Charlie was born on Independence Day, July 4, while we were shooting 'Independence Day: Resurgence' in Albuquerque! My dad had a younger brother, my uncle Chuckie, whom he adored. 'Charlie' is a form of 'Chuckie'. My uncle was my exact height, looked like me. Chuckie died in his 20s as a pilot in World War II."

Meanwhile, Jeff loves spending as much time as possible with his wife and their son.

He previously said: "Charlie gets bathed every night at 6:20, the three of us together in the bathtub. It's just delightful.