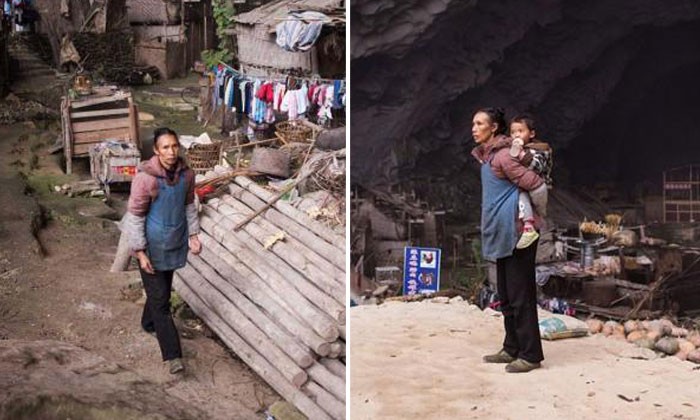 "Last cave-dwelling" village at Zhongdong village in southwestern China, have had modern conveniences such as electricity for years.

However, the outside world is only accessible by a footpath which winds through Guizhou province's rugged mountain terrain.

Now a local tourism development company has built a 15 million yuan (S$3.1 million) worth cable car which residents will be allowed to use free of charge.

According to Agence France-Presse (AFP) via AsiaOne, the cable railway will make their daily lives easier and also bring about new business opportunities.

It will be operating on May 1 onwards.

Currently, villagers have to haul in all food and products which they cannot produce themselves, including large items such as furniture, from the nearest town which is a three hour commute each way.

Some residents are excited by the economic prospects of more tourists but others are unconvinced that the new transport will make their lives in one of China's poorest regions better.

While some residents are excited by the economic prospects of more tourists, others are unconvinced that the new transport will improve their lives in one of China's poorest regions.

According to 22-year-old, Wang Xingguo, the cable car is not convenient for the rural people of the village especially since poultry and unwieldy cargo are not allowed in the cabins.

"They said they'd build us a road 15 years ago, but then they discovered this was a place they could make money off and so chose not to build it," he said as he ushered a herd of goats into a pen near the mouth of the nearly 200-metre deep cave.

He added, "When authorities decide to develop a scenic spot, only they get rich."

The name Zhongdong literally translates to "middle cave" which is a reference to its position between two smaller but uninhabited caverns.

Beneath the high ceiling, thatch-walled homes, piles of firewood, and domestic bric-a-brac like washing machines and bamboo posts hung with clean laundry surround

A central square, fashioned into a dirt-floored basketball court is surrounded by piles of firewood, washing machines and bamboo poles, all beneath a very high ceiling.

There is no consensus as to who were the original habitants but a few of the families say that they have lived there for generations.

Most are of the Miao ethnic minority.

Wang's father, Wang Hongqing, mentioned that their family moved into the cave when he was just a baby, not long after the founding of the PRC in 1949.

Bandits previously occupied the cave but was driven out by People's Liberation Army which made Wang's family seized the opportunity to make it their home.

Two decades ago, he became the first in Zhongdong to convert a part of his home into a small guesthouse and now makes some 18,000 yuan a year housing tourists.

New visitors brought by the cable car will make it "easier to make money" but he concedes that there are a negative side to it.

For almost ten years, the government asked villagers to move out, but Wang refused, frightened of losing such an important supplement to his income from growing corn and raising free-range chickens.

There are concerns too that if they leave, and the area is formally incorporated into the nearby Getu River Park for ticket-paying visitors, they would not be able to return - or even visit.

Wang clarified by saying, "When they make this a tourist site, they'll charge entrance fees, and I wouldn't even be able to afford to get into the place that used to be my home."

However, Wang's neighbour, Wei Xiaohong, hopes the improvements will bring their youth back from the cities where they have gone to find jobs.

The cave once housed a vibrant school with more than two hundred students from the broader region.

It was roofless, like a number of other structures inside with no need of cover from rain.

But it was shuttered by authorities some time back and now Wei's 12-year-old son have to travel on foot for two hours to attend class.

The development company manager, surnamed Luo, assured that he project would revitalise the village, gutted by the rural-to-urban migration.

He said, "Zhongdong's houses would be repaired, the primary school restored, and "the mess of dirty things inside" the cave cleared out."

"In five years, we will have reproduced some of the original buildings and recreated the primitive life of the men out farming and the women at home doing housework for the tourists to visit," he added.

A hiker visiting the cave, however, mentioned to AFP that he would not take the cable car once it was completed because it "damages this place and its original style".

He missed the cave while working at a factory in southern China's industrialised, prosperous Guangdong province, where he spends most of every year, but is concerned about its future.

"We don't live in an actual zoo, but it's more or less the same thing," he said as a dozen vocal tourists in athletic gear trooped in to snap selfies.

He turned back to his goats. "I don't dare imagine what this place will be like in the future."

Related Stories
Think this is a castle? It's a dorm room for 2 female students
Alexandra Hospital: A facility with a tragic past
What kind of a student lives in a mansion like this?
18 families live in a cave
China
village
poor
house
sad