Who is at fault here? Drivers argue over "stolen" parking lot at IMM 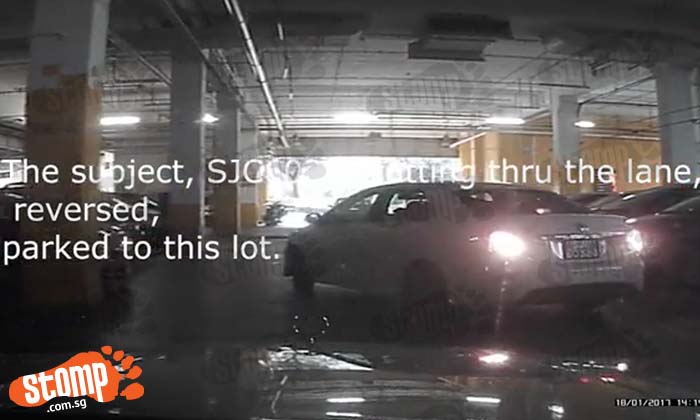 Stomper W got into an unpleasant dispute with another driver over "stolen" parking lot at IMM yesterday (Jan 18) at around 2.13pm.

According to W, he was waiting patiently for his turn to park his car, when a driver of a white car SJC6032J that was noticeably far behind drove by and inconsiderately forced his way into the Stomper's desired parking lot.

"I alerted the driver by sounding the horn at him several times.

"I then confronted him that it was wrong to "steal" my rightful car park lot that I had already waited for while patiently giving way for the previous parking lot occupant to move out.

"I even advised him to wait for another available lot.

"I told him that his car was behind me and that I had the legitimate right of way to park in that parking lot.

"He ignored my words and insisted to park his car there.

"The driver then challenged me to report to whoever I wish if I felt unsatisfactory of his action and said that he was not afraid of anybody.

"Knowing it was pointless to argue further, I decided to look for another parking lot."

Who do you think is at fault here? Watch the video and let us know in the comment section below.

Related Stories
Aggressive guy 'SDZ117M' jams on the brakes after getting honked at, asks BMW driver where his licence is from and challenges him to call cops
New videos show rider (FBL 4329P) chasing and challenging driver to a fight, then hitting and jumping on his car
Is this allowed? Lorry driver parks in regular car lot and obstructs traffic
heated argument
challenge
inconsiderate driver
rude
parking