Road bully cuts across lanes, jams on brakes and reverses towards car, right next to enforcement officer 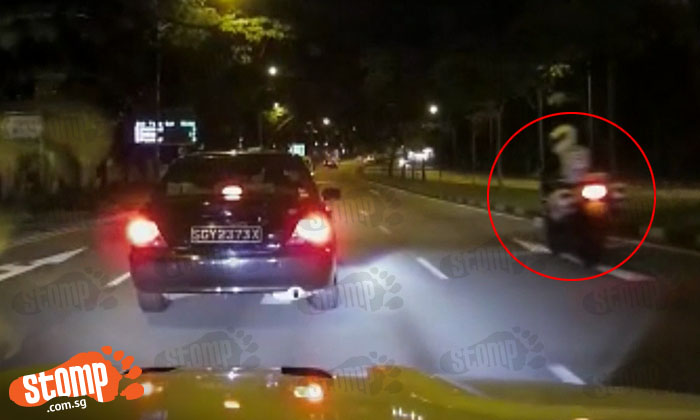 Stompers Shawn and Anna were shocked by the behaviour of a road bully at Clementi Avenue 6 at 11pm on Saturday (Jan 28).

The Stomper said he was driving down that road with his sister when they noticed the driver of a black Mitsubishi with the licence plate number SGY2373X going erratically.

According to Shawn, the driver was cutting across lanes abruptly, without signalling.

When a few drivers, including Shawn, sounded their horns at him, the Stomper said it seemed to anger the driver.

He then cut across the lane and jammed on the brakes on the left-most lane, in front of Shawn's car.

When Shawn switched lanes to avoid him, the driver cut abruptly onto the second lane, and jammed his brakes in front of the Stomper's car again.

This almost caused an accident as Shawn jammed on the brakes to avoid a collision, prompting a cabby behind him to do the same.

The driver then started to go in reverse, almost colliding into Shawn's car.

However, an enforcement passed by at that exact moment, and turned around to look at what the driver was trying to do.

Shawn said this prompted the driver to start behaving properly, and he went off on his way.

"This driver is clearly a threat to the safety of other road users," said Shawn.

Related Stories
Cabby 'die die' refuses to give way despite going against traffic and getting honked at -- then acts all 'self-righteous'
This is what happens when you deliberately speed up to prevent fellow motorist from overtaking
Driver sounds horn at, chases and stops woman who made reckless turn
Shawn
Anna