Motorist slams BMW driver for confronting him over lane change, but gets 'burned' by netizens instead 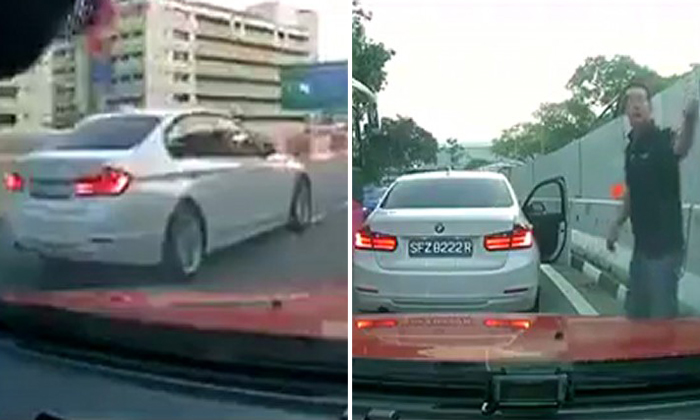 A motorist who posted a car-cam video online to complain about a BMW driver who confronted him ended up getting slammed by netizens instead.

A clip of the incident was posted on Kuanyewism, and shows cars travelling along a road in Singapore.

The driver of a white BMW signals to indicate a lane change, but the motorist who posted the video online speeds up instead of giving way.

After a couple of seconds, the white BMW can be seen speeding over chevron markings on the road in an angry attempt to overtake the car-cam motorist.

After doing so, the BMW driver stops in the middle of the road, gets out of his car and confronts the other driver.

The video contains no audio recording of the conversation, but the BMW driver can be seen returning to his car after a couple of seconds.

All the while, he is seen waving his arms and speaking in an angry manner to the other driver.

While netizens agreed that the BMW driver should not be driving over chevron markings or stopping in the middle of the road, they also said the motorist who submitted the video was no saint.

They pointed out that the car-cam driver had not slowed down or given way to the BMW driver despite knowing that he was changing lanes.

Netizens also pointed out that not only did the driver speed up, but also blocked the BMW driver from making a lane change.

Perhaps a little more graciousness would make our roads a better place.