Impatient driver U-turns into oncoming traffic at Lornie Rd, ends up ramming into another car 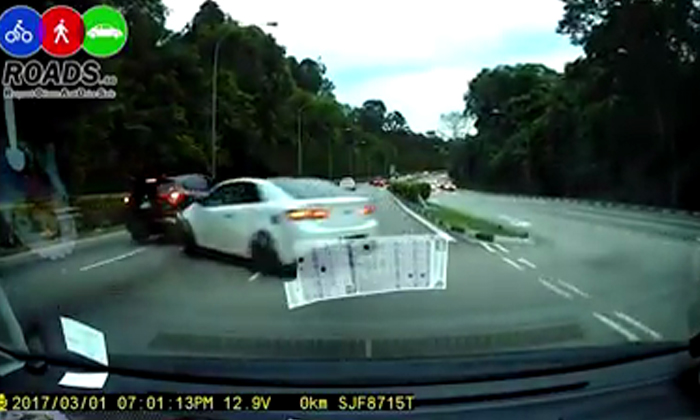 Patience is a virtue, as one driver found out the hard way on Wednesday evening (Mar 1).

In a video posted on Facebook page Roads.sg, credited to Jason, a white car is seen waiting to make a U-turn along Lornie Road. As Jason's vehicle approaches the white car, the white car turns out into the second lane, despite the oncoming traffic.

Jason slows down once he sees the white car begin to turn. However, a black car from the left of Jason’s vehicle is unable to slow down in time and ends up colliding with the white car. Both vehicles then come to a stop a little further down the road.

Facebook users who commented on the video said the driver of the white car should not have assumed that drivers on the main road, who had right of way, would let him make the U-turn.

Others said that it was notoriously difficult to make U-turns along Lornie Road, due to the continuous stream of traffic during the day, and dissuaded other motorists from making U-turns there.

Some also pointed out that the U-turn made by the white car's driver was illegal. The post stated the incident took place at about 7pm, but a sign at the lane reads that U-turns are not allowed from 5.30pm to 8pm on weekdays.