If cyclists get bad rap, blame these goondus who run red light and almost hit woman and child 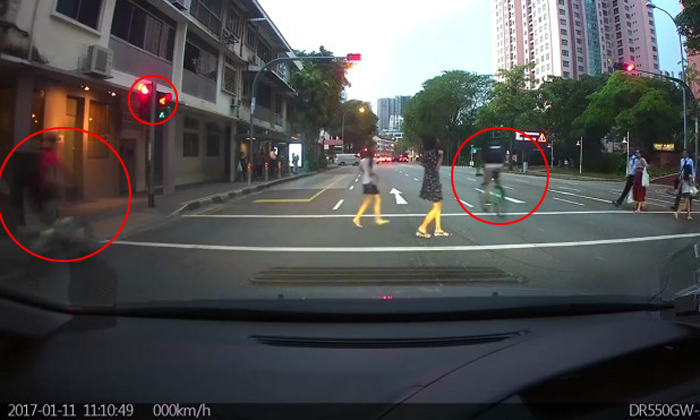 Cyclists generally tend to get lots of flak from motorists in Singapore.

Whether it is hogging the road or not obeying traffic rules, their misdeeds get highlighted often on social media.

To the point where most of us might have some pity for them.

Such pity, however, is quickly obliterated by cyclists such as the guys in this video shared on Roads.sg by Shaun Lee.

The clip shows pedestrians crossing at a traffic junction in Zion Road.

A woman and child run across the road, and are almost hit by a cyclist beating the red light at considerable speed.

A second cyclist also ignores the red light and speeds past the junction, just behind the woman and child.

According to Shaun, the two errant individuals are food delivery cyclists.

"This is not the first time that I have seen this happen.

"Looks like food delivery companies will need to reign in their staff," added Shaun in the post.

Related Stories
Reckless cyclist cuts into driver's lane then makes illegal right turn at Upper Serangoon Rd
What is going on? Cyclist flouts traffic rules by cycling against traffic flow
Reckless young cyclist along Hougang Ave 6 was THIS close to getting knocked down by car
cycling
reckless cyclist
dangerous