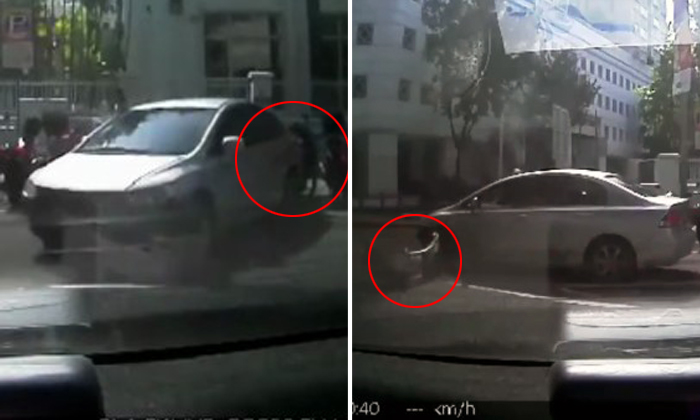 There are hit-and-run drivers who flee after damaging someone else's vehicle.

And then, there is the guy in this clip, posted on Beh Chia Lor - Singapore Road by Alfred Yeo.

Alfred explained that the driver seen in the clip had damaged his and multiple other vehicles at the parking lots near Sunshine Plaza at Prinsep Street between 10am to 11am yesterday (Mar 4).

The clip shows the driver reversing right into some motorbikes parked behind him.

He then stops by the side of the road to check on the motorcycles, but his own bumper is being dragged on the road.

It can be seen barely hanging on to the front of the car, and continues scraping the road whenever the car turns or moves.

He eventually drives over his own bumper in the process.

However, despite knocking into multiple vehicles, the driver simply drives off without leaving a note or waiting for the vehicle's owner.

An update posted by the Beh Chia Lor page administrators in the comments section states that the driver has since contacted Alfred to make pay the car's repair.

However, the administrators have stated that they would only remove the video if the driver has settled to repair costs for the motorcycles he knocked down as well.