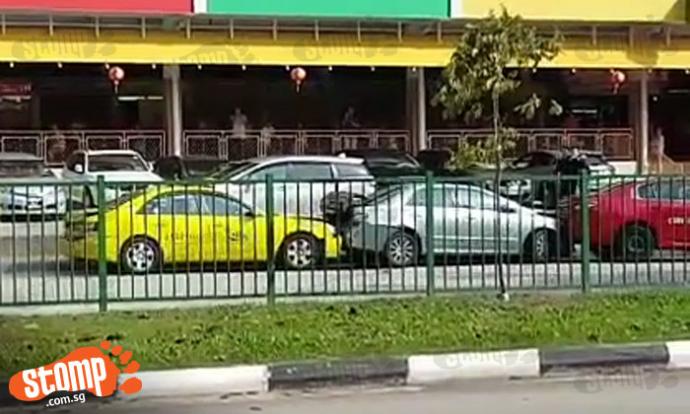 A taxi driver who damaged four cars after repeatedly ramming into them said that mechanical failure was to blame and that he had no control of the vehicle.

The 69-year-old driver was seen on video over the weekend driving his vehicle back and forth into the cars in front and behind his taxi at parallel parking lots outside the Old Airport Road Food Centre on Saturday (Feb 11) morning.

Based on preliminary investigations, the police ruled out drink driving or dispute as the cause of accident.

The driver, who refused to be named, told Lianhe Wanbao: "Of course the taxi broke down, why else would this happen?"

According to his account to the Chinese evening daily, he was trying to be considerate when the accident occurred.

He said he wanted to stop at the food centre to get a cup of coffee and to use the toilet.

After parking the vehicle, he thought he was too near the car in front, so he tried to reverse a little.

He had no control of the car when the accident occurred, he said.

"I was already parked, if I hadn't been so considerate, none of this would have happened," he told Wanbao.

The driver, who has decades of experience, said it's the first time this has ever happened to him.

He felt guilty at damaging the cars and has apologised to the car owners, he said. He added that the taxi was serviced three or four times in the last few months.

Taxi operator ComfortDelGro told The Straits Times that all taxis are sent for preventive maintenance every month.

"This is important given the mileage that our taxis clock on a daily basis. The taxi in questioned has been regularly serviced and was last checked just three weeks ago," said a spokesman.

Police investigations into the incident are still ongoing.