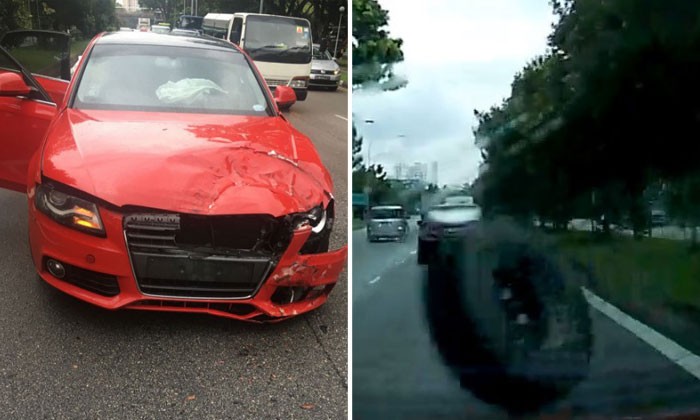 A driver was injured after crashing into a runaway truck tyre while travelling on the West Coast Highway at around 8am on June 1.

In a video posted on Beh Chia Lor - Singapore Road, the driver of a red car can be first seen on the third lane of the road when the tyre rolled across the road divider.

Unable to press on his brakes in time, the driver hit the tyre at considerable speed.

A photo of the accident's aftermath shows the left side of the car's bonnet smashed. The impact also caused the number plate to fall off.

According to a caption on the video, the driver suffered minor injuries on his right ear and was placed under observation.

Another video posted on the above-mentioned Facebook page shows the tyre getting dislodged from the truck on the other side of the road.

The tyre can first be seen gradually becoming loose before eventually coming off.

It then rolled across three lanes as well as the road divider thereafter.

Related Stories
How 'nice' of driver to give road divider 'fist bump' while travelling on CTE
Things could have ended much worse for motorcyclist on PIE -- if not for driver's quick reflexes
Oops! Lorry driver should have checked height limit before driving through building at NTU
More About:
accident
injured
car
truck
tyre