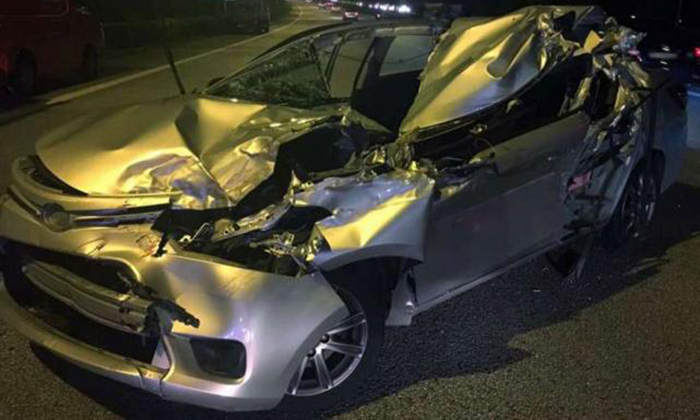 In the first fatality involving an Uber car, the driver of the Uber car was jailed for six weeks and banned from driving for five years on Friday (Feb 10) for negligently causing the death of his rear seat passenger and injuring a van driver.

He was ferrying Ms Goh and her then five-month pregnant sister-in-law in the Toyota Vios car at about 3.45am on Sept 25 when he failed to notice a stationary lorry ahead of him in good time.

The car rammed into the lorry, which had its hazard lights on, before crashing into Mr Shuis'van.

The impact caused the death of Ms Goh while her sister-in-law, Ms Chan Qian Jin, 20, escaped with cuts on her face.

Both women were not wearing seat belts at the time.

Investigations showed that lorry driver Dhanasikaman Pravin Kumar, 29, stopped his lorry on the leftmost lane of the three-lane road, behind Mr Shuib's van over a motor-related incident earlier involving the two vehicles.

Both vehicles were ferrying eight and four passengers respectively.

Ms Goh Pei Ling had been on her way home to Choa Chu Kang with her pregnant sister-in-law early on Sunday when their private-hire car ran into a lorry on the SLE.

Their driver is believed to be a 22-year-old Uber driver.

Meanwhile, Saddam was driving along the leftmost lane of SLE when he failed to keep a proper lookout.

He failed to see the stationary vehicles and only noticed the lorry when he was three to five car lengths behind.

He jammed his brakes and tried to switch to the centre lane, but the car hit the back of the lorry, then Mr Shuib, and the van.

The car spun 135 degrees, came to a stop facing the lorry and rested in the centre lane of the road.

Mr Shuib landed on the front windscreen of the car with a broken left arm.

According to the surveillance camera footage, Saddam's car hit the lorry about 17 seconds after the vehicle's hazard lights were switched on.

Ms Goh was taken to hospital where she was pronounced dead at 7.31am.

Seeking a sentence of six weeks' jail and a five-year disqualification on the causing death charge, Deputy Public Prosecutor Ryan David Lim said there was a significant degree of negligence, and the degree of harm in this case was high.

He said Saddam had ample time and distance -about 320m - to avoid a collision.

He pointed out that two vehicles had safely passed the stationary lorry and the van, and there was no reason for him not to have seen the vehicles.

Pleading for leniency, Saddam's lawyer Muntaz Zainuddin said her client, who is studying in Jordan to become a religious leader, has been traumatised by the accident.

He could neither sleep nor eat properly as a result of the guilt he felt at the loss of life.

He could have been jailed for up to two years and/or fined for causing death by doing a negligent act.

The maximum penalty for causing grievous hurt by doing a negligent act to endanger life is two years' jail and a $5,000 fine.

Related Stories
Certis Cisco officer dies after being knocked down by a car while trying to divert traffic at Tuas Checkpoint
Woman dies in Pioneer North Rd accident: Horrific videos show how bus ploughs into cyclist before crashing into BMW
One last ride: Daughter dies after ramming car into tree while sending mum to hospital in Malaysia
uber
jail
accident
fatal
reckless