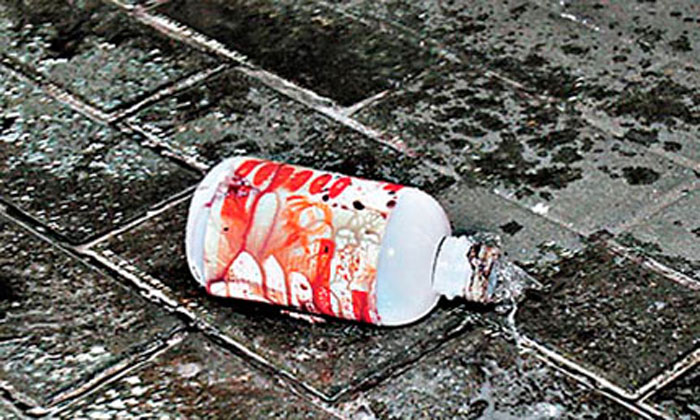 A part-time cleaner, who is estranged from his family, splashed liquid containing hydrochloric acid on the face of his 20-year-old son, causing a burn on his face around his eye and lips.

She said fortunately, the victim has fully recovered from his injuries.

Peh, who lives by himself in a rented flat, pleaded guilty to hurting his son, Jacob, by means of a corrosive substance at the family home in Yishun Ring Road on Aug 21, 2016.

The court heard that Peh was at the flat that evening to look for his ex-wife to discuss some matters.

He went to the kitchen and took out a green bottle containing a cleaning solution he took from Khatib Camp, where he used to work as a cleaner.

He poured the solution into a plastic Starbucks cup and took it to Jacob's bedroom before splashing it on the victim's face. He then walked out of the bedroom and left.

Peh's ex-wife and daughter found Jacob in his bedroom covering his face, which had turned red, and he was drooling uncontrollably.

There was also a strong burning smell, which made it difficult for them to breathe. They helped Jacob wash his face and opened the windows in the bedroom.

They also sprayed air freshener to clear the smell in the room.

He has since recovered from his injuries. There are no scars on his face and his eye-sight was not affected, said Deputy Public Prosecutor Li Yihong.

Peh claimed through his lawyer Natasha Goh, assigned by the Criminal Legal Aid Scheme, that his son was moving towards him. He misinterpreted it as an attack.

DPP Li said the prosecution's position is that the son was "in no way aggressive".

Peh could have been jailed for up to seven years and fined.

Related Stories
Man lands in jail after hitting brother with bicycle lock on the head at Bendemeer Road flat
Parent slaps daughter's 9-year-old classmate in school after finding out he had been disturbing her
Woman spends $12,000 on plastic surgery -- then gets disfigured by best friend because it 'made her look too pretty'
assault
attack
crime
court
courtroom
jailed