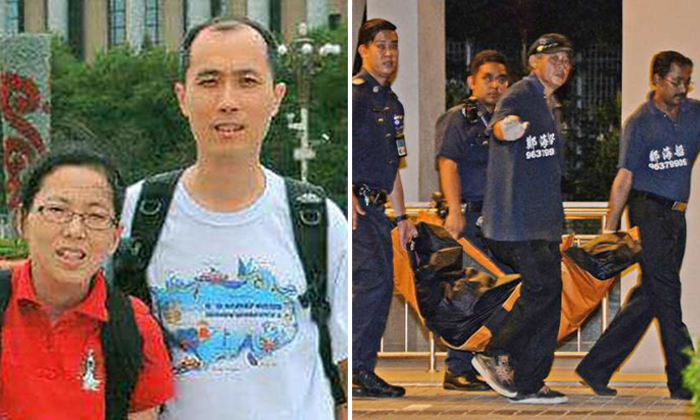 An unemployed man who killed his wife had earlier left two handwritten notes to their children, telling them to listen to their mother when "papa is no longer around one day'' and to study hard, a coroner's court heard on Wednesday (March 22).

The undated notes, written by Wang Chan Foo alias Ongko Widjojo, 46, were found in a cupboard at his Novena Suites unit by Inspector Lim Hui Shan, an investigation officer, who had searched the flat after Mr Wang's fall from height on Oct 22 last year at 7.12pm.

His fall from the 13th floor of the block was captured on the body camera of a police officer and seen by a neighbour at that floor. His 13-year-old daughter and seven-year-old son were in the lobby and they saw his body fall. He was found lying supine on the second-floor parapet and pronounced dead at about 7.30pm that day.

Civil defence officers broke into the unit and police found his wife's body in the master bedroom toilet. Accounts executive Ng Soo San, 44, who was clad in a red T-shirt and blue pants, had suffered eight stab wounds on her body and was pronounced dead at 9.34pm.

The couple had been living separately since end-2012 but would meet on weekends as a family.

Giving his findings at an inquest into the couple's deaths, State Coroner Marvin Bay said the evidence suggested that Wang's stabbing of his wife did not appear to have been an "extensively planned or pre-meditated act''.

"Mr Wang had nurtured thoughts of reconciling with Madam Ng, and they were even planning a family cruise trip in November 2016."

He noted that Wang had a regrettable history of abusive behaviour, which included two previous instances of assault on his wife. When he was angry, he perpetrated "impulsive and irrational destructive acts of throwing out his children's books from their apartment''.

"The stabbing therefore appears to be an impetuous act, when Mr Wang was aroused by an unknown stressor, or set of stressors, while the two were in the apartment together, and had stabbed Madam Ng multiple times, while she was in an unclothed state in the shower," he said.

The court heard that Madam Ng was supposed to pick up their two children from tuition at Velocity@Novena Square that afternoon.

When she failed to show up, her daughter called Wang, who said he was going to take Madam Ng to a hospital as she had sprained her ankle. He told the girl initially to wait at Koufu foodcourt in Novena Square, and later, at the lobby of Novena Suites in Moulmein Road.

Wang later told his daughter to play on the second floor of the condo. When she called at 5.57pm, he said he was in a "traffic jam''. She eventually contacted her maternal aunt to pick them up after calling him five times to no avail.

Coroner Bay said while there was no evidence to suspect foul play in Wang's death, the investigation did unequivocally indicate that Madam Ng's death had been brought about by an act of foul play perpetrated by her husband.

A month before the incident, Wang, who had severe insomnia, had overdosed on 20 sleeping pills with red wine. While he denied any suicidal intent, Wang's message to his sister made ominous references to "leav(ing) this world'' and his "last lap of life''.

"Mr Wang may also have wrestled with the notion of ending his life, given that he had appended two notes respectively addressed to his daughter and both children, instructing them to study hard if he were no longer around,'' he said.

He said Wang's stabbing of his wife appeared to be an impulsive and disorganised act, one which he had not fully thought through.

"In the circumstances, I find Mr Wang had first perpetrated the unlawful killing of his wife Madam Ng, before causing his own fall from height in a deliberate act of suicide,'' he said.