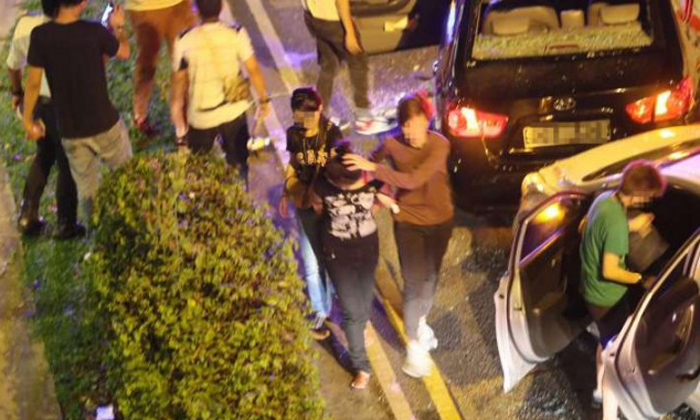 A 27-year-old man suspected of drug trafficking was arrested in the wee hours of Tuesday (Feb 7) after a dramatic police chase.

The chase resulted in four cars colliding and a Central Narcotics Bureau (CNB) officer was injured in the melee.

The incident occurred at about 12.30am at Lentor Avenue towards Yishun Avenue 2, Lianhe Wanbao reported on Tuesday.

The vehicles reportedly involved in the collision included the black rental car driven by the alleged trafficker, a police car and a CNB car.

The fourth car involved was reportedly driven by an employee of the company that owns the suspect's rental car, and who was dispatched to track down the customer.

The man attempted to evade arrest after he was stopped by Traffic Police in a joint operation, CNB, the Singapore Police Force and the Singapore Civil Defence Force said in a joint response to The Straits Times on Tuesday.

About 4.3g of "ice" or methamphetamine was recovered from the vehicle driven by the suspected drug trafficker, who was not hurt in the collision.

Those found guilty of possessing or consuming methamphetamine can be jailed for up to 10 years, fined $20,000 or both.