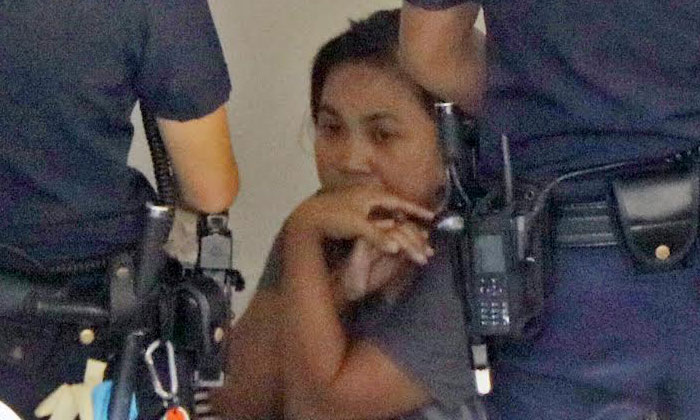 A 37-year-old Indonesian maid was charged in court on Wednesday (Feb 15) with murder after an elderly woman was found dead in a Tampines flat on Monday (Feb 13).

Minah, who goes by one name, is accused of killing Madam Tay Quee Lang, 78, in a fifth-floor flat at Block 276, Tampines Street 22.

Dressed in a black-and-white striped top, she was expressionless when she appeared in court.

She is represented by lawyer Nasser Ismail who is appointed by the Indonesian embassy.

The maid was the only other person in the flat at the time of the incident which took place at around 2.10pm.

Police said they received a call for assistance shortly after.

On Monday, the maid was seen leaving with police officers at about 6pm to assist in investigations.

Madam Tay's body was taken away at about an hour later.

The elderly woman, who was wheelchair-bound after a fall last year, lived there with her husband Mr Tan Hee Seng, who is in his 70s.

Neighbours said that the maid, who had been with the couple for about a month, was heard screaming shortly after the incident.

She will be remanded for psychiatric evaluation at Changi Women's Prison and will be back in court on March 8.

If convicted of murder, she will face the death penalty.