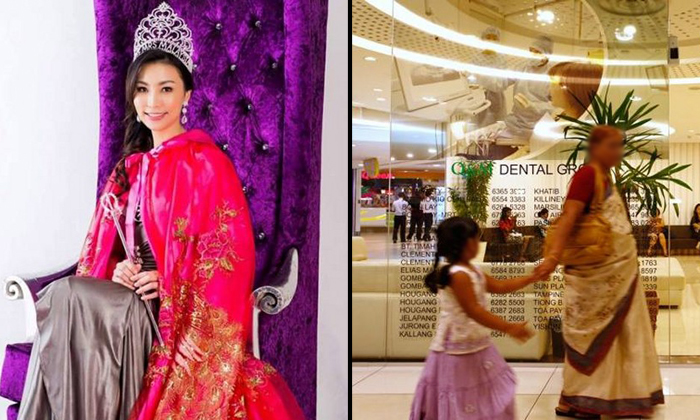 A former Mrs Malaysia Universe and her husband are embroiled in a legal spat with dental chain operator Q&M Dental Group.

The Singapore-listed company has sued Madam Zoe Chong Lee Lee and her husband, Dr Matthew Hong An Liang, after uncovering evidence that suggested that both have breached various agreements.

They used to run Q&M clinics in Johor, Malaysia. In a stock exchange filing, Q&M Dental said its evidence suggested that the duo had deposited or transferred company funds into their personal accounts, and that they had set up a competing business directly located behind one of the Q&M Johor clinics, using the company's resources without approval.

Dr Hong was a director of Q&M Molek and Q&M Austin in Johor and was also practising as a dentist in the Johor clinics until he was suspended in June 2016.

Madam Chong was the general manager of the clinics until she was relieved of her services in July 2016.

Their family members who worked at the clinics also had their employment terminated.

In its Feb 7 filing, Q&M Dental said the High Court of Malaya has granted several injunctions, which prohibit Dr Hong, Madam Chong and related parties from entering into any Q&M Johor clinics or interfering with their business, tampering with the company's property, and intimidating or coercing its staff and patients.

It said the public prosecutor in Malaysia has charged Dr Hong in the Johor Bahru Magistrate Court with using criminal force against one of the dentists.

He was also charged for criminally intimidating one of the dentists.

Q&M Dental has also lodged a complaint with the Malaysia Dental Council against Dr Hong for unprofessional conduct as a dentist for previously carrying out unapproved procedures in its clinics.

The company said that contributions from Johor do not materially affect its performance and financial results.

Madam Zoe, a mother of two, made headlines in Malaysia after winning the Mrs Malaysia Universe pageantry in 2015.