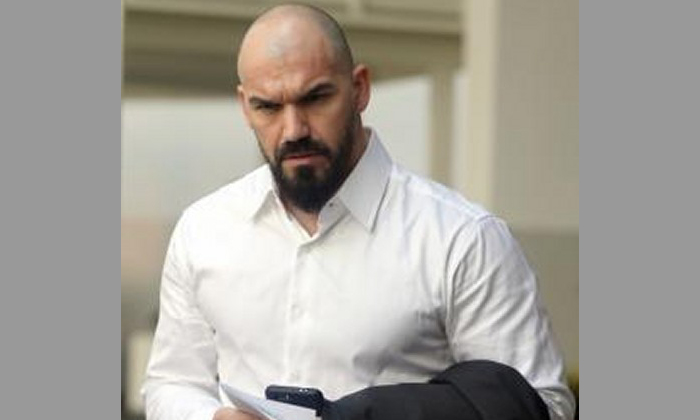 The six-year-old girl was less than a metre away from her father when a man approached her and showed her a video on his mobile phone - of himself engaged in a sexual act.

The 41-year-old American businessman, "Mr Peter", and his Singaporean wife - their identities cannot be revealed for legal reasons - told The Sunday Times yesterday that their daughter, now eight, appears to have coped quite well since the July 2015 incident.

That day, Mr Peter had taken his daughter to a martial arts gym near Little India.

She sat at the side watching him train less than a metre away, he recalled.

Robinson, a regular at the gym, had sparred with Mr Peter several times before, and had even trained him personally.

So when Robinson, now 39, went up to his daughter and showed her something on his mobile phone, Mr Peter did not think anything of it.

He said: "I remember looking at my daughter and she was not engaging him. But that's normal behaviour for her - she's super, super shy."

It was only later that night that the girl told her mother what she had seen on Robinson's phone.

"She was very calm and described what she saw vividly, like it was a movie," said Mr Peter's wife, a 42-year-old executive.

The girl had recognised Robinson in the video by his tattoos. The couple filed a police report immediately.

Unknown to them then, Robinson had, after showing the girl the video, asked her if she liked it.

He then told her not to tell anyone about the incident by putting his finger to his lips and saying "shhhhh".

The girl told her mother about it anyway, as her mother had taught her that she should not show her private parts to other people.

In a public Facebook post last Friday that has since been taken down, Mr Peter expressed disappointment at Robinson's jail term, which he described as "a slap on the wrist".

Among his other offences, Robinson had unprotected sex with two 15-year-old girls and filmed the acts on his mobile phone.

He also had in his possession 321 films containing child pornography with children as young as two years old.

Robinson was out on bail when he targeted the six-year-old girl.

Mr Peter said he decided to come forward to raise the importance of telling young girls that it is okay to speak up if something similar happens to them.

"You should talk about it. It's safe, you will be protected," he said.

The couple yesterday informed their daughter and nine-year-old son that the "bad man" was now in jail as a punishment.

His daughter reacted by saying: "Cool!"

Mr Peter said: "We told her that she's very brave and she's like a hero to other girls for coming forward. I think it's important that in her mind, there's closure. These things can come back to hit you in a bad way later."

Ms Rachel Lee, a principal social worker at Fei Yue Family Service Centre who works with children who have experienced trauma, said the couple should continue to talk about the incident with their daughter.

"They should also tell the child that what happened is wrong, but she is not at fault," she said.

They should also monitor her for any sexualised behaviour in future, such as the tendency to expose herself or habitually play with her private parts, she said.

Ms Lee added that, in general, it is good for parents to talk to their children about sex, but in an age-appropriate manner.

"For very young children, talk about what's a 'good touch' and a 'bad touch', and which are the 'private areas' and the 'public areas' (of their body)," she said.

"So if someone does something inappropriate, they'll know to tell their parents or teachers about it."