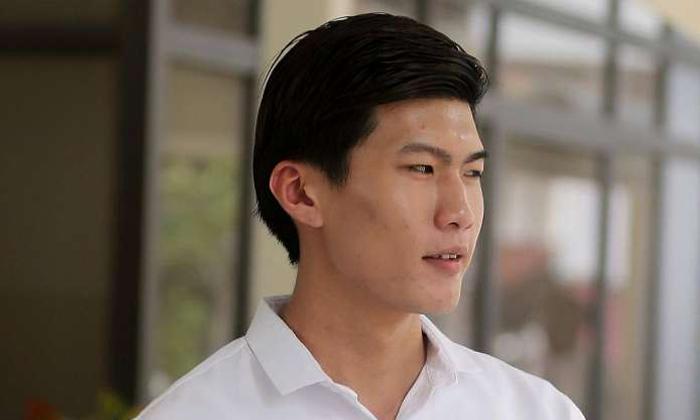 A district court has convicted former Certis Cisco corporal Gregory Lai Kar Jun, 23, of performing a rash act by shooting a bullet from his revolver in a game similar to Russian roulette at the Tuas Checkpoint on Aug 13, 2015.

After a three-day trial, District Judge Hamidah Ibrahim also found him guilty on Tuesday (Jan 24) of two other charges - intentionally obstructing the course of justice by hiding the discharged round in a traffic wand and lying to a policeman about the incident the next day.

Stressing that a revolver loaded with a live bullet is not a toy, she said: "The accused had absolutely no justification in the first place, in the absence of any threat, to remove his revolver from its holster, place a single bullet in the chamber, putting his finger on the trigger guard and firing it off twice."

Judge Hamidah noted that Lai's then-colleague, Muhammad Dzul Adhar Azmi, who was also a Certis Cisco corporal, was about a metre away when he fired the round.

She added: "It has to be stressed that it was a very small confined room, measuring 2.7m by 1.7m and the bullet could have ricocheted anywhere within the room.

"He must have been fully aware that squeezing the trigger of a loaded gun with another person in very close proximity was a highly risky act that could endanger human life."

The two men were on duty at the checkpoint on Aug 13, 2015 when Lai, who is now a GrabCar driver, decided to toy with his revolver at around 2pm.

He placed the bullet inside the weapon but nothing happened the first time he squeezed the trigger.

But it went off when he squeezed the trigger again.

They looked for the discharged round and Lai found part of it under a table about an hour later.

He hid it inside the battery compartment of the traffic wand.

Dzul, now 22, took the discharged round to Bedok Reservoir and threw it into the water at around 2am the next day.

Dzul was jailed three weeks and fined $2,000 on Oct 21, last year, after pleading guilty to intentionally obstructing the course of justice and failing to give information to the police about the rash act Lai had committed.

Lai's case is adjourned to Feb 9 for his lawyer, Peter Ong Lip Cheng, to present his mitigation.

For intentionally obstructing the course of justice, he can be jailed up to seven years and fined.

The maximum sentence for performing the rash act is six months' jail and a fine of $2,500.