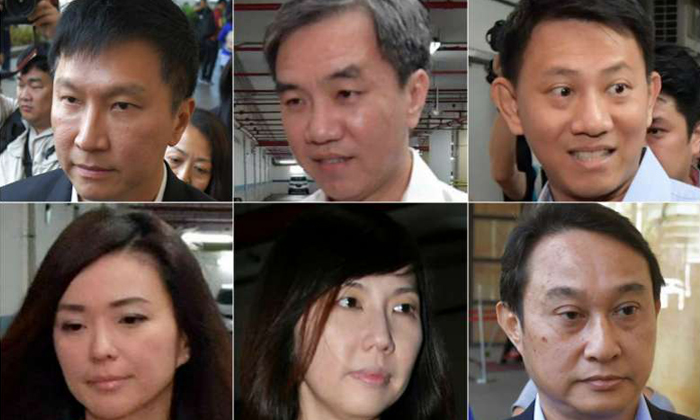 The most expensive criminal trial in Singapore's history is set to get even more expensive.

Lawyers' fees for the 142-day City Harvest Church (CHC) trial at the State Courts, from its start in May 2013 to sentencing in November 2015, had previously been estimated to cost more than $10 million.

But this could rise by between $1 million and $5 million more, now that the prosecution has referred the case to the Court of Appeal.

This came after a High Court appeal last Friday ended with jail terms for all six defendants cut.

Each of the five defendants who are still being represented by lawyers could incur at least $1 million more in legal fees, for what is likely to be the most crucial stretch left in the long-drawn case, said senior lawyer Foo Cheow Ming.

"As the criminal reference (at the apex court) is crucial and will affect the bottom line fate of each party, I don't see the additional fees as being lower than $1 million per head, as starters, maybe even more."

Taking a different view, Senior Counsel Thio Shen Yi said additional legal costs might possibly be kept at about $250,000 per party as the criminal reference will be centred solely on the interpretation of Section 409 of the Penal Code.

"The work the lawyers have to do at this stage may be fairly limited. They know the facts of the case well and instead, they will be now diving deeper into an isolated point of law."

The sixth defendant, former CHC fund manager Chew Eng Han, has been representing himself since May 2014.

Four of the other five are represented by high-ranking senior counsel, who typically charge $1,200 or more an hour, lawyers said. And the appearance of these top counsel in the High Court or Court of Appeal usually costs about $10,000 to $20,000 a day.

However, the lawyers may agree on a cap on legal fees, depending on a client's ability to pay.

The CHC trial is the second longest in history, beaten only by a drug-trafficking case in the 1990s that went on for 168 days.

Senior Counsel N. Sreenivasan, who represents CHC deputy senior pastor Tan Ye Peng, said yesterday: "The truth of the matter is that most, if not all, of the accused (including my client) have long run out of funds to pay their fees during the trial itself, let alone for the appeal and now the reference."

But the lawyers have continued "because it is our duty to complete a job that we have started and because we have come to see our clients as people caught in circumstances that they did not fully appreciate at the time events took place".

The lawyers for the other four defendants declined to comment.

In June 2012, the Commissioner of Charities (COC) issued an order to restrict CHC from paying the legal fees of those involved in the case, and neither the church nor its employees may be involved in raising funds for the legal costs.

A COC spokesman told The Straits Times the order is still in force.

However, the church, in a list of questions on the case posted on its website, said that while it is restricted by the authorities from helping to pay for the legal fees, "individual members are free to support them".