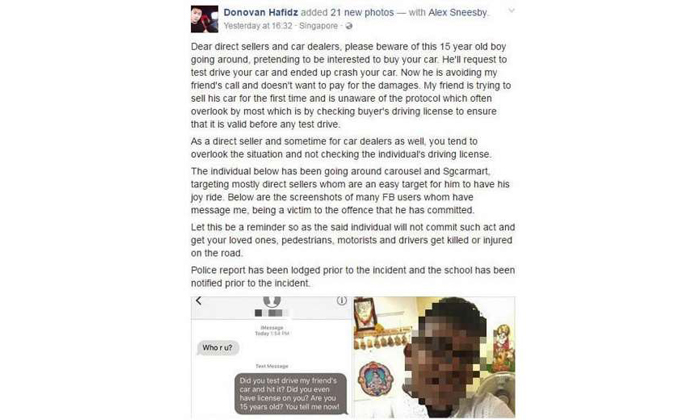 Police are investigating the case of a boy who is accused of approaching sellers online to test drive cars, and then refusing to pay when he got involved in accidents.

To make matters worse, the boy is believed to be below the legal driving age. The Straits Times was not able to verify his age but social media postings about the case say the teenager in question is 15.

Facebook user Donovan Hafidz warned car sellers and car dealers in a post on Tuesday (Jan 24) to "beware of this 15-year-old boy going around, pretending to be interested to buy your car".

He alleged that the teenager requested to test drive his friend's car and wound up crashing it, refusing to pay for damages.

The police confirmed with The Straits Times on Wednesday (Jan 25) that a report was lodged and that investigations are ongoing.

Mr Hafidz in his post said his friend was a first-time car seller and was not aware that he should check the buyer's driving licence to ensure it is valid before the test drive.

In his post, which he has since deleted, Mr Hafidz wrote: "The individual below has been going around Carousell and Sgcarmart, targeting mostly direct sellers who are an easy target for him to have his joy ride."

He added screenshots of messages from several other Facebook users who allegedly also had the same experience with the teenager. In some instances, the boy had allegedly told sellers he had lost his IC and driving licence.

On his Facebook page at 7.44pm on Wednesday, Mr Hafidz explained that he had removed the post at the request of the teenager's parents.

"I'll let the school and police settle on the act that he has committed. Thank you," he wrote.

Asked about his post by The Straits Times, Mr Hafidz said: "We've settled the case."

Related Stories
Woman buys '100% authentic' LV bag from Carousell seller -- which turns out to be 100% fake
This Carousell seller needs to take a chill pill before scolding buyer for using exclamation mark
iPhone 7 'seller' scams a dozen of more than $10,000 on Carousell
car
underage
Carousell
online