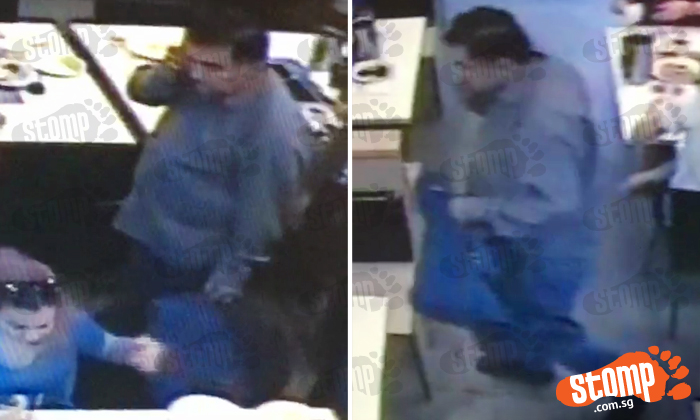 Stomper Sangary had her bag stolen from right under her nose while she was having lunch at City Square Mall in Johor Bahru, Malaysia yesterday (Feb 8).

The incident occurred in Seoul Garden at around 1.10pm.

Stomper Kannan had alerted Stomp to the incident and linked us up with Sangary, who described what happened in a phone interview.

She said, "My bag contained my passport, a Samsung Note 5 phone, RM400, S$50 and my house keys. But now everything is gone."

CCTV footage of the theft shows how a man walked past Sangary's back while she was having her meal before returning and loitering behind her, while appearing to talk on the phone.

Both times, he can be seen eyeing and brushing his fingers against Sangary's bag, which was placed on a chair next to her.

Despite an interruption from another diner who was trying to get back to his seat behind the man, the latter was not deterred.

After some time, he simply picked up Sangary's bag, brought it back to where he had been sitting before committing the act and promptly left the eatery.

Sangary said, "I took a video of the CCTV footage to show the police and have made a police report, after spending two to three hours at the police station in Malaysia.

"The man is not a customer. At Seoul Garden, you have to pay before eating so staff said that the man had actually asked to see the food before he decided whether to eat there. That's how he entered the place."

Sangary said that she then went to the Consulate General of the Republic Singapore, located at Level 35 of City Square Mall, for help.

There, she had to prove her identity so that they could help her prepare the necessary documents to pass through Immigration and return to Singapore.

Sangary added, "I got back to Singapore at close to 9pm after all the hassle. I am now at the Immigration & Checkpoints Authority of Singapore (ICA) to pay the $15 for the documents from the Consulate."

"Throughout the whole incident, there was one Malaysian eyewitness and a police officer following up on the case who were very helpful.

"The eyewitness was a female student who was seated beside me in the restaurant. She acted as my translator because I couldn't speak Malay."

A police report has also been lodged in Singapore.

Sangary told Stomp that while she has lost all hope of retrieving her valuables and passport, she hopes to raise awareness about the incident by sharing her experience.