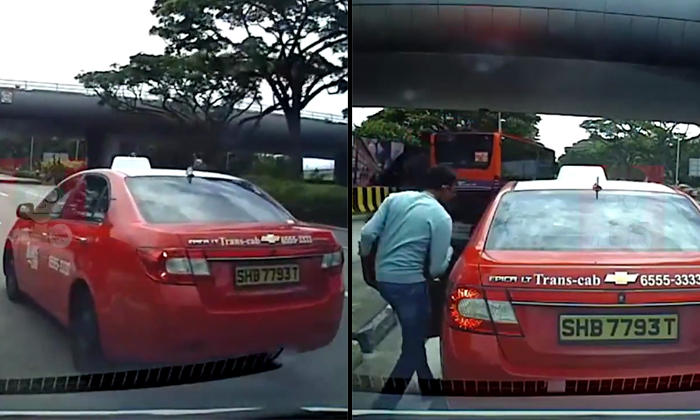 A cabby was caught on camera recklessly cutting lanes and abruptly stopping along an expressway to pick up passengers on Sunday (Feb 12).

In the video uploaded on Facebook page Fabrications About the PAP, the red taxi is initially seen travelling along the second lane of Airport Boulevard towards the city. It changes lanes to the third and cruises along for a while.

The driver of the vehicle from which the video is filmed is travelling on the fourth lane, and is starting to accelerate when the taxi suddenly cuts into the driver’s lane without signalling.

In order to avoid a collision, the driver has to slam on the brakes.

However, right outside the bus bay, the taxi comes to a complete stop, forcing the driver to halt as well.

A couple then proceed to board the taxi from the bus stop, before the taxi drives off again.

Netizens were outraged at the video, with comments pointing out that taxis are not allowed to pick up passengers along an expressway, while others praised the driver for being alert while on the road.