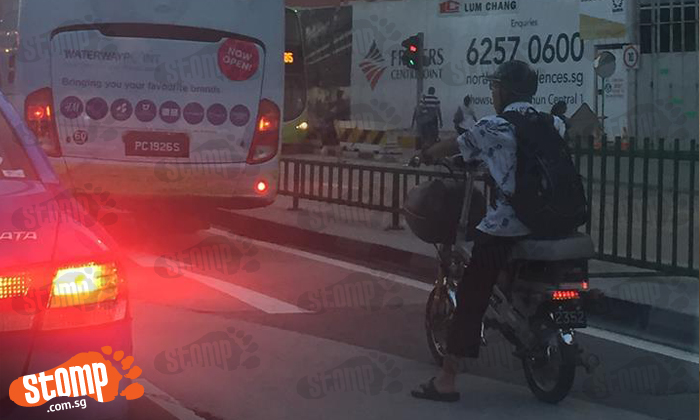 Stompers Regine and Danny alerted Stomp to an e-biker who was spotted riding in the first lane multiple times along Yishun Ave 2, heedless of the danger he posed to other motorists and himself.

Regine said her husband, Danny, told her that a motorcyclist almost hit the e-biker at the traffic light on Tuesday evening (Feb 14) at the junction of Yishun Ave 2 and Yishun Central Road.

“The motorcyclist was unaware that he was riding an electric bike and almost hit him while accelerating after the traffic light turned green.

“Looking at the many accidents caused by electric bikes last year, I strongly believe it is a matter of time before something happens to him.”

After the near-accident with the motorcycle, Regine took a photo of the e-biker travelling in the first lane, outside North Park Residences.

Danny told Stomp that it was not the first time he had seen the biker on the road. He said the e-biker had almost been involved in an accident with a private bus on Monday evening (Feb 13) at the same junction.

According to the couple, the e-biker had a tendency to frequently change lanes in a dangerous manner.

Regine shared with Stomp a video of the man changing lanes from the first lane to the third along Yishun Ave 2, between Khatib and Yishun, on Monday at around 7.20am.

Under the Active Mobility Bill, power-assisted bicycles should be ridden “as close as practicable to the left hand side of the roadway.”

“We are concerned about his safety.

"An accident like that which happened at Hougang can happen to him too. By that time, it will be too late.”

Regine was referring to the collision between an e-bike and a car at the junction of Buangkok Green and Hougang St 93 on Feb 13. The 57-year-old e-biker succumbed to his injuries the next day.

“The e-biker is posing a risk not just to himself, but to other motorists as well by riding on the road.

“If he were riding along the double yellow lines, or on the pavement, at least he would be more visible to motorists and they would be aware of his presence.

“He might want to ride in the first lane so that he can save time, but life is priceless. He should not risk his life like that.”