13-year-old with Asperger's impresses big companies with his art 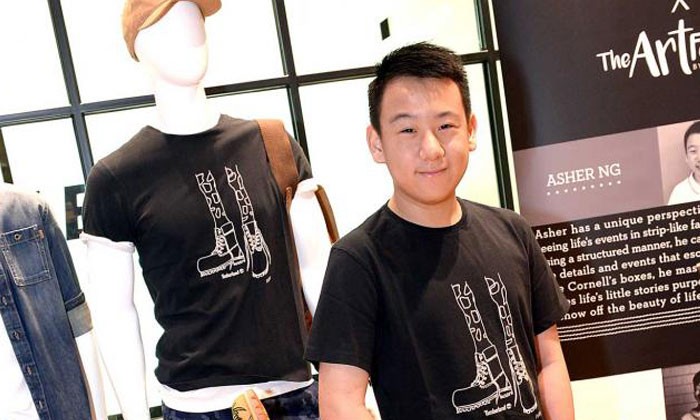 Designing a T-shirt for lifestyle brand Timberland might be a tall order for most teens.

But Asher Ng, 13, turned to the tallest animal in the world for inspiration.

The Pathlight School student, who loves animals, drew the feet of a giraffe snuggled in a pair of Timberland boots - by hand.

Explaining his design, Asher told The New Paper: "The giraffe has long legs and I think it would look good in boots. Since it lives in the safari, the weather there is harsh so it needs a good pair of boots."

The teen's design was one of two chosen by Timberland to be printed on T-shirts, which went on sale yesterday for $39.

For each T-shirt sold, $5 will go to The Art Faculty, which sells products by students from the school. Pathlight School specialises in teaching autistic children.

Asher was one of 12 students selected by the school for Timberland's design project, which was part of an effort to give back to the community.

He is one of the 36 students enrolled in the school's Artist Development Programme.

Ms Daisy Tan, 38, general manager of VF Brands, the parent company of Timberland, was impressed with the standard of designs.

She said: "Asher's design had everything that you find in our boots - the quartz stitch design, as well as the silhouette feel."

Ms Loy Sheau Mei, 51, senior vice-principal of Pathlight School, said: "This is a platform for more people to understand about the talents and abilities of this special community."

Asher has come a long way since he was diagnosed with Asperger's Syndrome, a mild form of autism, at six years old.

His mother, Madam Lillian Ong, 47, a retail manager, said she and her husband felt very sad about his situation at first, but looked for solutions.

Madam Ong said: "(When he was about three), we wanted to know how to improve the situation instead, so we decided to enrol him in speech and occupational therapy back then.

"We eventually sent him to Pathlight School when he was seven as it provided a mainstream education in a special needs school."

Two years later, they sent him to Very Special Art, a local charity dedicated to providing opportunities in the art for people with disabilities.

Asher won the first contest he took part in and his parents realised that art was a medium for him to express his dreams to the outside world.

Since then, his art has been bought by companies such as Credit Suisse and Jurong Port.

Asher also excels at the ukelele, has a great memory and is compassionate.

Madam Ong said: "He performed at the Esplanade (Theatres on the Bay) playing the ukelele and could remember every single piece of information he researched on very clearly."

He also received the school's Most Compassionate Student award for two consecutive years.

Madam Ong said: "He always tells me he wants to build an industrial hotel in Ang Mo Kio because there are a lot of workers there. He thinks that an affordable, nice hotel would be good as they would not have to travel all over."

The teen, who just completed his PSLE last week, said: "I want to set up my own company and become an animator."

About the artist development programme Pathlight School's Artist Development Programme (ADP) aims to uncover and develop the potential of students. Under it, student artists are nurtured and taught by professional art teachers.

They are given opportunities to exhibit their works and where possible, their artwork is turned into art merchandise, and student artists can earn royalties.